ROLANG School in Bucharest, dedicated exclusively to teaching the Romanian language to foreigners, has become the first language center in Romania offering the internationally recognized teacher training program EUROLTA (European Certificate in Language Teaching to Adults). The EUROLTA certificate is developed, issued and recognised by the ICC, a network of leading institutions of adult education in Europe and around the world. 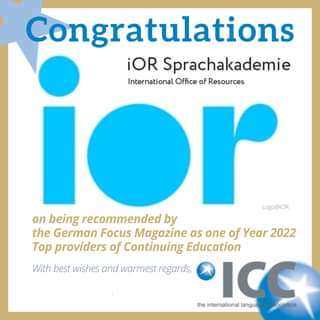 The Chair, Dr. Ellinor Haase, and Board Members of ICC are proud to share the news of our member institute – iOR Language Academy – being presented by the German Focus Magazine as one of the Top providers of continuing education in 2022 in Germany, Austria and Switzerland.

Among the 20,000 institutions and companies that Focus Magazine evaluated in 2021, iOR and other 336 institutes were particularly positively rated in the dimension of Social Listening and are thus presented in the list of the magazine’s recommendations for 2022. This recommendation entitles iOR to use the Focus Seal “TOP”  as a proof of its service quality.

On behalf of ICC, Ellinor has sent our heartfelt congratulations to iOR and its whole team on this great acknowledgement of its dedication to and advocacy for language education. We all are looking forward to further collaboration to create a better future for language teaching and learning together!

Europa Experience EU@Ode at the library Ode in central Helsinki

Language activities. Online memory game on languages. There will be several different games and levels to choose between. For instance, the visitors should pair a greeting in a foreign language with the right flag, such as “Hola” and the Spanish flag.
“I love languages, because…”

Competition/ Quiz. Sixth edition of the multilingual dictation organised each year by the Representation in France: online dictation in six languages (English, German, Spanish, Portuguese, Italian, Dutch) about a topic interesting the EU, filmed in a setting related to languages. Participating classes receive diplomas for every participating student and goodies for the ten best students in each class.

physical event. We would like to bring the EU closer to the public, offer publications in multiple languages, inform interested visitors about job opportunities at the EU and promote language learning. At the same time, language institutes and adult education centres will offer suitable courses.

Teaching with Tintin and The Blue Lotus

Join our brand new interactive course for language educators. You get the opportunity to develop your language teaching skills in an international environment. Participants have workshops and brainstorming sessions which focus on using works of art as a tool in language learning classroom. In addition to classes and workshops led by expert facilitators, the course includes visits to cultural spaces and museums, with time to explore and find inspiration. Venice is incredibly international with a wide range of cultures represented in the artwork displayed.

The project seeks to help learners become digital citizens and develop the capacity to use digital media critically, creatively and autonomously in several languages. The project will build on recommendations and guidelines from the Council of Europe and other international institutions as well as on national policies in order to develop a pedagogical framework and resources for use by language teachers.

In many education systems, the development of learners’ transversal competences has become an important focus of policy. Working on learners’ ‘transversal competences’ means developing their knowledge, skills, attitudes and values in areas such as global citizenship, education for sustainable development and media education, and also their intrapersonal and interpersonal ‘21st century skills’, which include co-operation, teamwork, critical thinking, and digital literacy etc.

The ICC is a member of the ECSPM (European Civil Society Platform for Multilingualism) and thus involved in a very interesting project:

With a large and all-encompassing consortium consisting of 52 partners covering all European countries, research and industry and all major pan-European initiatives, the European Language Equality (ELE) project develops a strategic research, innovation and implementation agenda as well as a roadmap for achieving full digital language equality in Europe by 2030. The whole project is designed in such a way that all individual work streams create input for the strategic agenda, for example, in terms of empirical evidence, desk research or technology deep dives.
Read more: https://european-language-equality.eu/